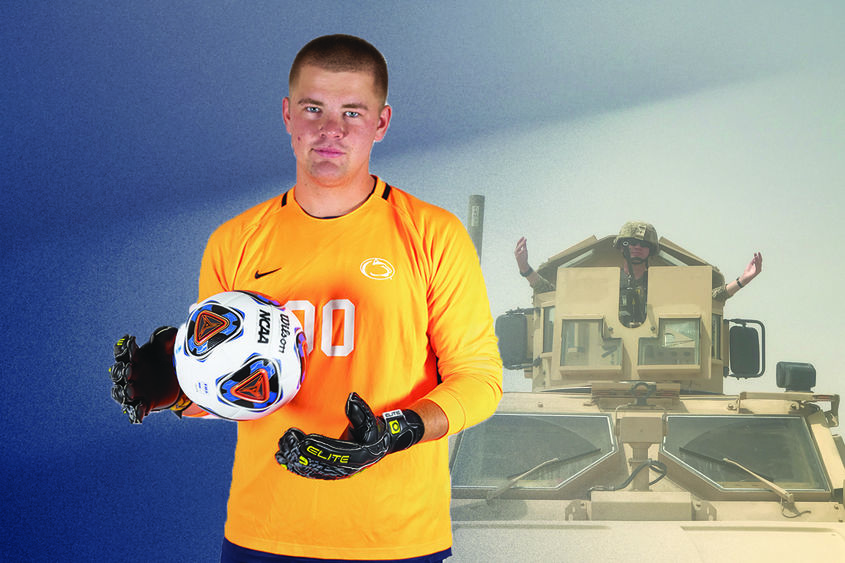 Joshua Zakrzewski, U.S. Air Force staff sergeant and senior student-athlete at Penn State New Kensington, has been recognized on and off the soccer field. The administration of justice major most recently served in the Middle East as a member of a security escort team and hopes to remain in public service after graduating.

Joshua Zakrzewski recognized for successes on and off soccer field
January 29, 2020

NEW KENSINGTON, Pa. – The commitment to serving others has guided one Penn State New Kensington student-athlete as he answered the call of duty on and off the soccer field.

“I’m a firm believer in protecting people,” said Joshua Zakrzewski, staff sergeant in the U.S. Air Force and senior at the campus.

Zakrzewski, who describes himself as someone who puts “family, friends and education” first, was called to a career in the military so he could help others and continue his family’s history of service.

“Both of my grandfathers were in the service,” said Zakrzewski. “I always viewed it [serving in the military] as an option.”

Before graduating high school, the Gastonville, Pennsylvania native enlisted in the U.S. Air Force and is part of the Security Forces unit, which is responsible for protecting military assets around the world. Most recently in 2018, Zakrzewski was on active duty in the Middle East as a member of a security escort team that helped accompany more than 250 personnel. 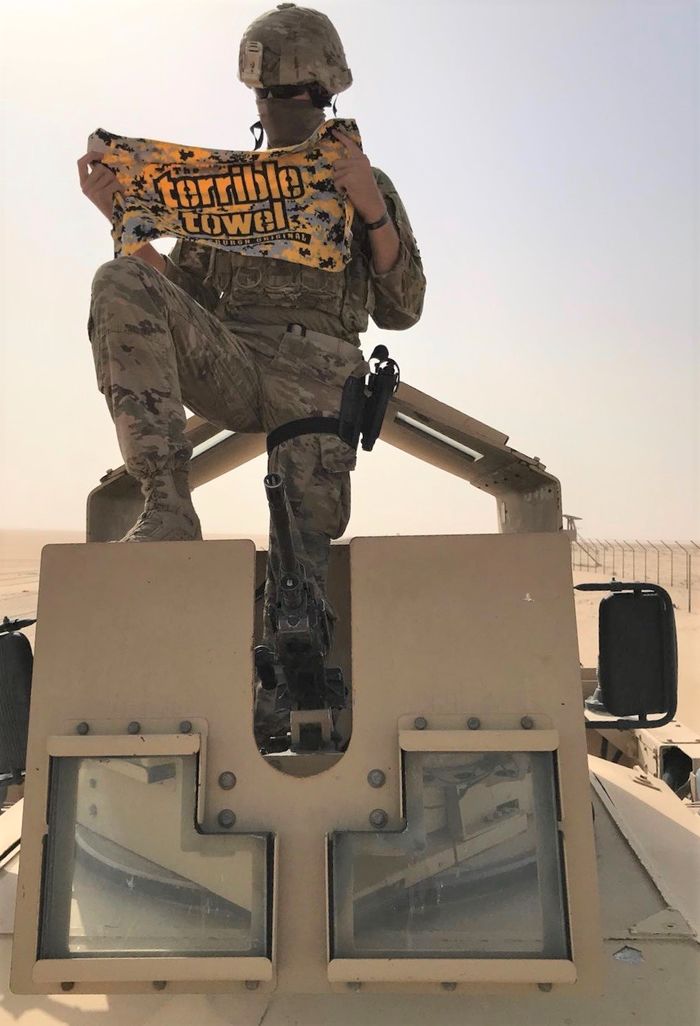 Joshua Zakrzewski sits atop a M-ATV, which is a mine resistant ambush protected vehicle (MRAP), while showing his support for the Pittsburgh Steelers during a deployment to the Middle East. The staff sergeant with the U.S. Air Force is also a senior student-athlete at Penn State New Kensington.

Leading and protecting others also translated to Zakrzewski’s lifelong passion for soccer.

“It started when I was 4,” the goalkeeper explained. “I had never played goalie until I was in middle school. I had a growth spurt, that’s why they put me in goal; it just took off from there.”

Zakrzewski joined the Pittsburgh Soccer Club as teenager and played for Victory Express Soccer Club of Washington, Pennsylvania. “I went every Sunday for training; it helped me out a lot,” remembered Zakrzewski, who added how thankful he was to his parents for supporting his soccer career, citing hours spent in the car on the way to and from practices, games and tournaments. 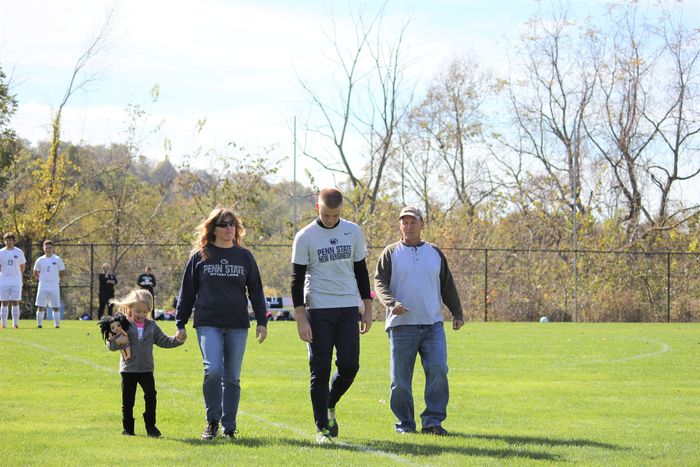 Mark Duffield, Penn State New Kensington’s men’s soccer coach since Dec. 2017, had heard of Zakrzewski before they even met and was excited to coach him as the goalkeeper for the campus team.

“I wasn’t planning on playing soccer in college,” said Zakrzewski. “I came here (Penn State New Kensington) because I know the value of a Penn State degree. Who doesn’t know Penn State? I wanted to come here because of the great academics, but the soccer coach also reached out to me.”

Duffield said, “Having him back there (as goalie), everyone feels a lot more confident. He’s a guy who made important saves at important times.”

Megan Bratkovich, director of athletics for the New Kensington campus, thinks highly of Zakrzewski, calling him “a great personality.” She also understands the importance of athletics for students like Zakrzewski, who thrive as part of a team. “We offer a place that they can get a great education and continue to play a sport they love,” she said.

Zakrzewski’s dedication to his team and the game has been evident by the many accolades he has earned during his time at the campus. He has been named Penn State University Athletic Conference (PSUAC) Goalie of the Week four times in his career and was named to the PSUAC All-Conference Second Team in 2019. In addition, he received honorable mention all-American accolades from the United States Collegiate Athletic Association (USCAA). During the fall 2019 season, his five shutouts ranked him third in the USCAA, and his 87 saves ranked him 10th in the nation.

His experience, leadership and ability have also been proven invaluable for the men’s soccer team, as he helped bring them into the PSUAC playoffs in 2016, 2017 and 2019, each of his years with the team and on campus when he was not deployed or attending military training.

“He was definitely a huge part of the success we had this year,” said Coach Duffield. “He’s definitely the best goalkeeper in the conference. When the ball goes back there, you’re always confident. If you need to save the ball, Josh will save it.”

Although he has played his last season on the field as a Nittany Lion, Zakrzewski plans to continue representing Penn State’s values during the remainder of his academic career at the campus as he completes his bachelor’s degree in administration of justice. After graduation, he hopes to continue his call to public service by working for a federal agency.

“I care about people,” said Zakrzewski. “I’m always here if someone needs something.”