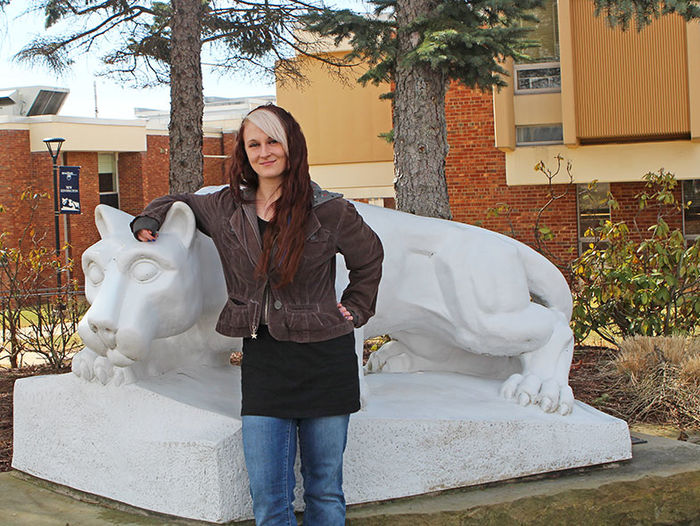 1. What made you choose the AOJ major?

2. Where did you complete your internship, what were your duties, and how were those experiences beneficial do you?

I completed my internship at U.S Probation and Pretrial Services in downtown Pittsburgh. I had the opportunity to witness three different departments in action which were pretrial, presentence, and post-conviction. I saw the ways in which they interacted with one another to move an offender through the federal system. I listened in on phone interviews with offenders, attended pretrial court sessions, researched docket sheets for the pretrial clerks, verified information offenders provided to presentence officers, attended sentencing hearings, and traveled with post-conviction officers in the field. We would visit offenders in their homes to check on their progress with treatment as well as collect urine for analysis. I attended meetings that were cognitive behavioral therapy-oriented in their approaches for offenders who had prior drug convictions and were on federal probation. Reformed offenders would often come to the meetings as guests to share their experiences with the other offenders about recovering from a criminal lifestyle. I started developing a spreadsheet for a presentence officer who facilitated these sessions in order to track the success of the program.

The most beneficial experience of my internship was learning about sexual offenders in the federal system. These individuals primarily disobeyed sex offender registration requirements, which further interested me in learning about Megan’s Law and Pennsylvania’s laws regarding these individuals. This experience has contributed to my interests in researching sex offender registry/policy.

3. In what ways did your AOJ classes prepare you for your internship?

I was able to see the material I learned about in class in action while I was attending my internship. I had attained a better understanding of what I learned in my AOJ classes once I saw how the federal system worked. I also learned the basics about federal courts and the actors within the court systems which helped me greatly when I attended court sessions.

4. What are you plans for after graduation?

I hope to attend graduate school in the spring semester of 2016.

5. What advice do you have for current AOJ students?

This major is not for the faint of heart; maturity is a crucial quality I believe all AOJ students should have before entering into this field, or at least develop while they are in college. Many students pursuing this degree tend to look into field work, such as policing and corrections officers. Effective writing is a skill one should intend to master before graduating from this program. As many AOJ students have experienced, we have the tremendous opportunity to talk to experts in the field and they emphasize the importance of writing. Effective writing skills will not only help an individual while he/she is in court, but it will help strengthen the reputation of the individual. 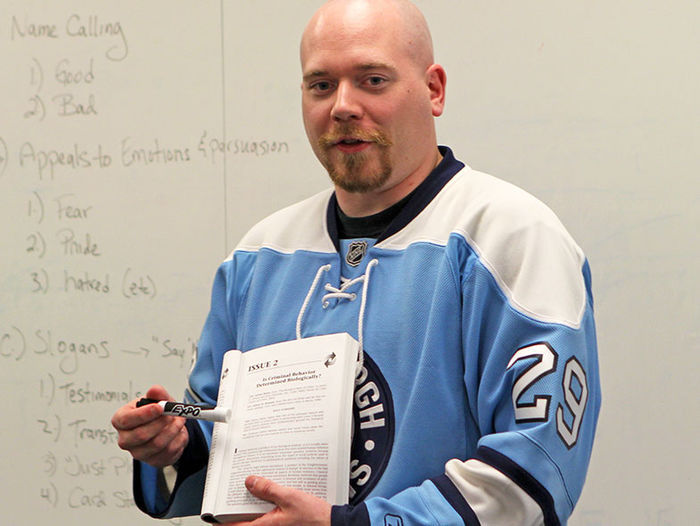 Whether it’s helping fellow soldiers on a base in Iraq or fellow students in the learning center at Penn State New Kensington, Jack Ramsey has a knack for teaching.

Ramsey, a junior in the Administration of Justice program and U.S. Army veteran, is a tutor for the campus’ Academic and Career Success Center. The center serves as an academic support unit for students in a variety of subjects, including writing and math. Each year, nearly 400 students take advantage of the tutorial services.

“For some reason, helping people comes easy to me, as does teaching,” said Ramsey, who served six years in the military.  “I believe my military time helped tremendously.”

An Army specialist, Ramsey supervised the company’s medics and headed the base’s behavioral health unit. He was responsible for organizing and teaching combat life-saving courses. The 40-hour courses, a blend of classroom work and hands-on experiences, included topics such "Care Under Fire," which involves placing tourniquets and moving wounded soldiers to a safer location, and "Tactical Field Care," which emphasized, among other things, the proper technique for inserting a catheter into the chest cavity. Classes of more than 100 soldiers were not uncommon.

“These courses were typically taught as ongoing classes, so whenever there was down time, we would fill the space with something relevant,” said Ramsey, who deployed twice to Iraq. “I also taught a more involved course, under the direction of the supervising physician's assistant, for Iraqi’s who were ambulance drivers for their local cities.”

After receiving an honorable discharge, Ramsey enrolled at Penn State. The Post 9-11 GI Bill provided the wherewithal for a post-secondary degree, and the New Kensington campus provided the means to that end.

“I initially chose Penn State New Kensington because it was close to home, and my relatives and friends are doing well with their Penn State degrees,” said Ramsey, who earned a bachelor’s degree in 2014. “Once I was here, I’ve found that the professors are excellent, well versed and passionate about their fields. The smaller class sizes lead to a much better teacher-student rapport.”

His initial foray into tutoring came a year ago at the behest of Craig Hammond, assistant professor of history. Hammond, who also serves as the coordinator for Academic Mentoring program for the campus' athletic teams, asked Ramsey to help tutor student-athletes at the campus.

“When Jack enrolled in my history class, I was immediately impressed with his work,” said Hammond, who joined the campus faculty in 2008. “The veterans and adult learners on campus are a very strong group academically. Jack immediately stood out as the best of that group. Over the past two years he has been a tremendous asset to our campus.”

“I think that Professor Hammond was impressed with my writing ability and wanted me to serve as tutor for the basketball team,” said Ramsey, a graduate of Shaler Area High School.  “This year, it has exploded in scope, from doing three different teams, to adding specific classes to my palette.”

Other professors took note of his pedagogic knack and enlisted his aid. In addition to writing, he tutors students in statistics and criminal justice classes. And it is a reciprocal arrangement. While Ramsey benefits others, he serendipitously benefits himself.

“Tutoring lets me get back into the work from prior courses and allows me to retain much more of the information,” said Ramsey, a resident of Pittsburgh.  “So, while helping others, I am also helping myself.”

"It’s always great to pair up a returning veteran like Jack with traditional students,” said Hammond, who holds a doctorate in history from the University of Kentucky. “Veterans and adult students add something special to classes. Jack goes beyond that with his tutoring. Not only does he help students succeed in the classroom, but he also serves as a great mentor.”

Besides connecting with fellow students, the 29-year-old Ramsey connects with fellow veterans. More than 31 percent of the campus population comprises veterans and adult learners.

“Vets seem to find each other and offer an area of support,” Ramsey said. “No one knows vets better than other vets, and as such, I think it has been invaluable having so many of us here.”

After graduation, Ramsey plans a career with the FBI. If his military and collegiate experiences are any indicator, his aspirations will be realized. 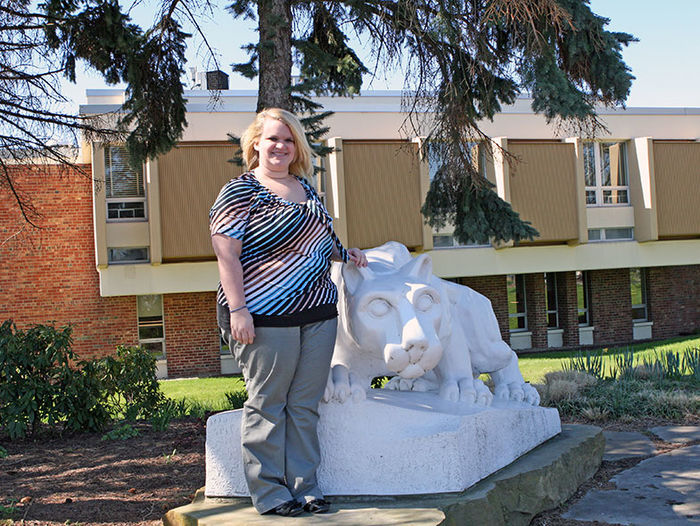 A Penn State New Kensington student secured a prestigious internship with the US Probation and Pretrial Service Office in Pittsburgh, which took Chelsae Hickman of Leechburg to Pittsburgh’s William S. Moorhead Federal Building.

“Chelsae is over the moon,” said Dr. Kristine Artello, assistant professor in the Administration of Justice program.

The internship, which was open to AOJ and Criminal Justice students as well as those pursuing fields like Psychology and Criminology, lasts between three and four years while the student participating completes a master degree.

Hickman plans to study for a Masters in Social Work and also a degree in law.

"I knew this would be a good match for her,” Artello said. “She’s good, she’s an exceptional young woman.”

Artello credits Hickman’s skills, which she said are already at the graduate level, for helping her to receive the internship. Writing, critical thinking and presentation skills set students like Hickman apart, she said.

Because she works so closely with her students, Artello said she’s often able to help them hone their skills so that they can present themselves very professionally.

The ability to apply her classroom skills and knowledge in a real world setting will be a welcome one and, Artello said, even something as small as citations and formatting will be valuable in the context of Hickman’s work while participating in the internship.

Hickman at times has supplemented her work with additional studies, like finding books on subjects her class is studying and reading up on them.

"We have a lot of wonderful students,” Artello said. “She’s always going that extra mile.”

Penn State New Kensington’s AOJ program is new, and Hickman is one of its first graduates.

“I’m very proud of Chelsae, and I know she’s going to do great and wonderful things,” Artello said. “That’s why I was very excited when she got the internship.”