Penn State New Kensington was founded in 1958 as a result of a study of the local need for higher education in the Alle-Kiski Valley. From its roots in a remodeled high school building on Fourth Avenue in New Kensington, the campus has evolved into a modern educational facility on seventy-two beautifully wooded acres in Upper Burrell. 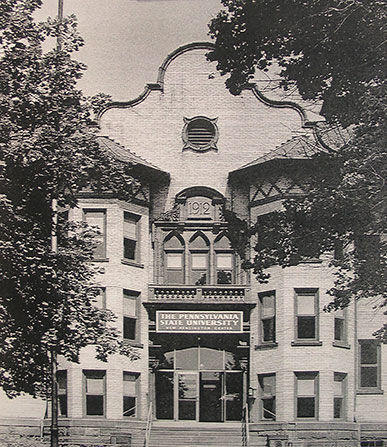 The New Kensington Center was opened in 1958 in the First Ward School Building in the heart of the city of New Kensington. In 1963, the Center moved to the former Parnassus Junior High School and began offering the first two years of Penn State's baccalaureate programs on a full-time basis in education, liberal arts, business administration, and human development.

In the same year, Alcoa offered to give the University a thirty-five-acre tract of land on Route 780 in Upper Burrell Township, four miles east of the city.

Two years later, 1968, the Science, Activities, Faculty and Administration, and Library buildings were completed. The new facilities included additional labs and the Art Gallery. In the same year, twenty-seven additional acres were purchased from a neighboring farmer.

The Athletics Center (formerly the Health and Physical Education Complex) opened in 1969. Inside, the center comprises the 600-seat Field House (home of the basketball, volleyball, and wrestling teams), racquetball courts, wrestling room, a weight room, cardiovascular training center, nurses station, and faculty offices. The outside venues include a regulation soccer field, home of the men's soccer team, a multi-purpose practice field, and a practice green for the men's and women's golf team.

In 1971, the Forum Theatre, a 350-seat thrust stage theatre, opened with the student production of "A Funny Thing Happened on the Way to the Forum."

As the campus grew, so did its enrollment and the need for a gathering place for students. In 1975, the Student Learning Center opened with a cafeteria, recreational facilities, bookstore, and Academic and Career Success Center.

After a ten-year building hiatus, the new Conference Center and classroom building opened in March 2001. It contains a large conference room, a kitchen, two large and six small classrooms, faculty and staff offices, and a lobby with a large courtyard. 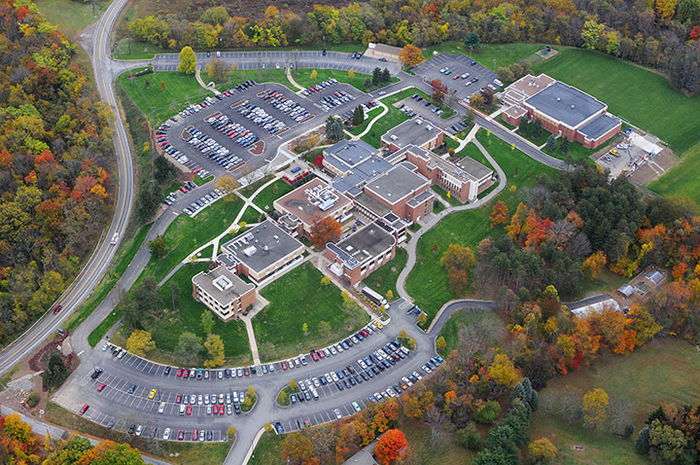 An aerial view of Penn State New Kensington in 2012.

In 2009, the cafeteria was remolded and renamed Cafe 780. In addition, a coffe bar, the Junction, opened in the lobby of the main entrance. The Café 780 court yard was remodeled in the summer of 2014 with the addition of a pergola, fire pit and new furniture. The Athletics Center was renovated in 2011 with a new cardiovascular room, new locker rooms, and a upgraded weight room. A pilates/yoga room was added in 2014.

Today, nearly 800 students matriculate on campus and are studying in 15 bachelor's and associate programs. As we plan for the future, the New Kensington campus is looking to add additional academic programs that are grounded in the campus’ curricular strengths — math, science, and liberal arts — to meet the changing needs of the region. Students seek a campus that is accessible, flexible, time and place appropriate, and one that provides a broad range of choices.  New Kensington is such a campus and it is an intricate member of the 24-campuses that comprise The Pennsylvania State University.

This is Penn State