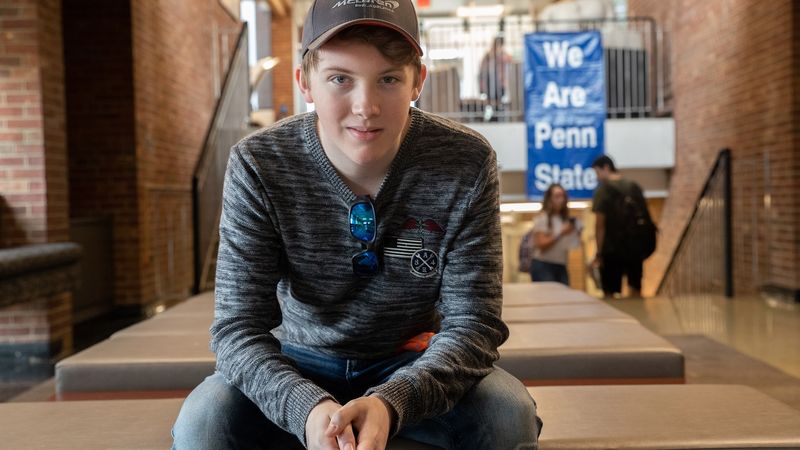 NEW KENSINGTON, Pa. — Mackinly “Mack” Adams hasn’t been in a real classroom since the fourth grade.

The Arnold, Pennsylvania, native was diagnosed with a rare form of actinic prurigo, a disease that causes severe reactions to sunlight and ultraviolet (UV) light.

“Basically, what it means for me is the sun or UV rays poison my body,” explained Adams. “While other people might be able to go outside or even do simple things like go grocery shopping or go to school, I cannot do that due to fluorescent lights and sunlight.”

Adams, when he was no longer able to attend conventional school, completed the rest of his education and earned his high school diploma through online and home schooling. Although there were many options for seeking a college education without having to set foot on a college campus, Adams dreamed of having a real college experience.

His mother reached out to Penn State New Kensington, a short drive from Adams' home, to see if his dream of attending college could become a reality.

“I wanted this experience. I feel like that for college, you need the face-to-face interaction, and there’s so many people that are going through the same thing that if you need help, you can find that here.”

“It was a disease I wasn’t familiar with," said Randy Tressler, physical plant manager, "so I needed to educate myself because I wanted to make sure just changing out lights, bulbs and fixtures would be enough or know if we needed to do other things,”

Through his research about the condition, Tressler learned that light-emitting diode (LED) lighting was safe for those suffering from the disorder. The campus had already started converting some of its older, fluorescent lighting to LED lights to meet sustainability and energy goals. A meeting was set up between Adams, his mother and members of the campus in the Arbuckle Technology building, an area already converted.

“He [Randy] did more research before we even met him than I think some doctors do before meeting Mackinly,” said Adams' mother, Kelly. “He realized, before I even told him, that LED lights were great.”

Following the meeting, Tressler and his department began working on a plan to help make Adams’ dream a reality. Over the summer, Tressler leveraged funding and donations from vendors so that multiple areas of campus could be converted to LED lighting sooner than originally planned. More than 700 bulbs and fixtures have been converted to date, with more planned in the future.

“I can remember how excited Kelly and Mack were that we already had a building that was LED,” said Adam Robinson, learning center coordinator. “That first meeting was an immediate motivator for me, and I think, for all of us.”

The journey to Penn State

Severe migraine headaches began to plague the Arnold youth almost daily when he was just seven years old. By lunchtime, he would have unexplainable reactions that caused him to be sent to the emergency room three to four times each month, and began failing in his schoolwork. He also suffered symptoms outside of school.

“We couldn’t figure out why, when he was little, we would get through the front doors of a store, and by the time we would get to the back of the store, he would be red and look like he spent eight hours at the beach without sunscreen,” Kelly Adams remembered. “It’s scary seeing your child like that and not know what’s going on and no doctor can tell you.”

Visits to more than 15 doctors in four states over a span of three years finally led Adams to the diagnosis of actinic prurigo with the help of a doctor in North Carolina who would reference a white board containing lists of the youth’s symptoms and test results. Many of those tests had to be run through the National Institute of Health’s Undiagnosed Diseases Program in Bethesda, Maryland.

Adams’ form of the condition is at the most severe end of the disease’s spectrum, and, to the family’s knowledge, less than 20 individuals in the world experience symptoms this acute.

By following “light-safe” pathways throughout campus, Mack Adams is able to attend classes, participate in activities and use campus services.

In addition to external skin reactions, including his ears swelling and splitting to the point of scarring, the condition manifests internally. Adams must regularly check his red blood cell counts and liver levels because his internal organs can be affected, and simple infections, such as a cold, can severely impact his body.

“It also affects me and my thinking,” added Adams. “The first thing that usually goes is my cognizance, so I can’t think clearly.”

Although there are three forms of ultraviolet (UV) rays, Adams reacts worst to UVB and UVC rays. UVB rays, emitted from the sun, can cause sunburn and are linked to skin cancer. UVC rays, which are absorbed by the atmosphere, are found in man-made sources of radiation such as fluorescent lighting.

After the diagnosis, Adams and his family found assistance through online support groups, understanding neighbors, and an organization called Camp Sundown, a summer camp for youth suffering from ailments caused by the sun and lighting.

The unconventional new norm for Adams and his family revolved around flipping their days — sleeping during the daylight and tending to life at night.

“Mack's always been independent, so that’s never been a concern,” said Kelly Adams. “He has had to navigate doctors and tests and a lot of things on his own without me being there; he grew up that way quickly.”

“I’m nervous to actually be going to college and in a physical place because it’s new to me,” said Adams during one of his first visits to campus. “I’m also excited to just have this experience.”

To date, he has been attending classes and tutoring sessions, participating in activities and even bringing his hobby of photography to campus by taking photos at events. His goal is to earn a bachelor’s degree in information sciences and technology (IST) at the campus.

“I really never thought he would be able to go to a campus and experience it, and it’s amazing,” said Kelly Adams.

By following “light-safe” pathways throughout campus, Adams is able to attend classes, participate in activities and use campus services.

“I wanted this experience,” said Adams. “I feel like that for college, you need the face-to-face interaction, and there’s so many people that are going through the same thing that if you need help, you can find that here.”

Kevin Snider, chancellor of the New Kensington campus, believes the project is just one example of the University and campus’ commitment to Penn State’s land-grant mission.

“People are here because they want to see students succeed, and I have never been at a place where I’ve seen more people investing in the educational process,” said Snider. “We need to provide access, be affordable and create opportunity. Mack is an example of that. That’s part of what a land-grant institution should do. Each and every day, we have people who are putting as much individual attention into many students just as we have for Mack.”

Snider added, “We want him to have an experience of just being a regular, everyday person coming to college to learn, live, engage and take opportunities to the fullest. If we can provide that, this is a student who is going to soar. I think he has a huge future ahead of him, and I’m glad we can be part of that.”

Although Tressler, his team and those who have been collaborating are modest about the work they led and completed for the campus’s energy sustainability and Adams, seeing him on campus as a Penn State student gave new meaning to their daily work. 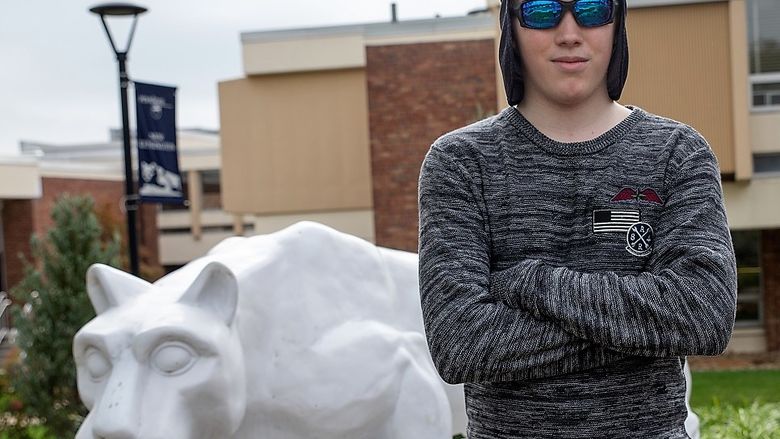