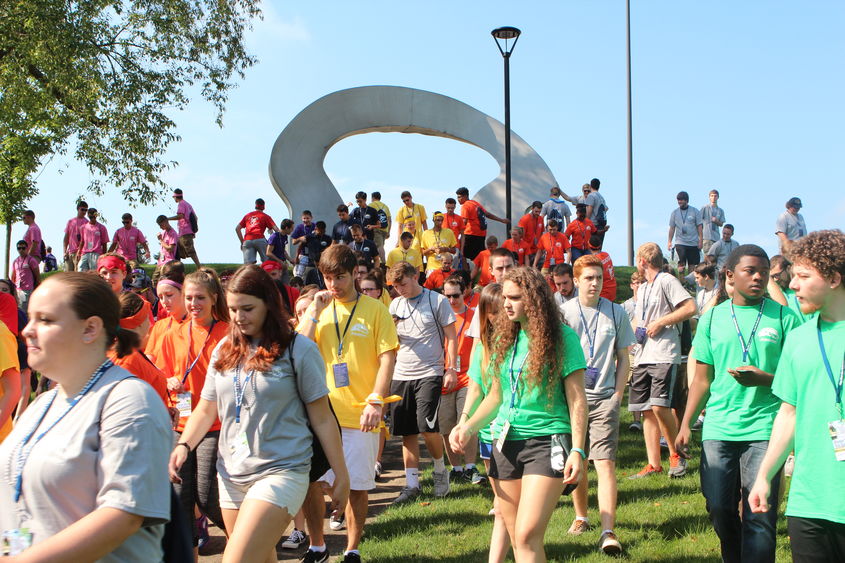 Members of Penn State New Kensington’s Class of 2020 head to the next activity after posing for the traditional class photo under the campus’ iconic Arch during New Student Orientation.

NEW KENSINGTON, Pa. — For the first time in six years, Penn State New Kensington’s overall enrollment saw an increase, according to the annual snapshot count taken at the end of the sixth week of fall semester classes.

The campus’ fall 2016 semester enrollment stands at 686, an increase of 30 students from last year. The nearly five percent increase was the best among Penn State’s Commonwealth campuses, which includes the western campuses of Beaver, Erie, Fayette, DuBois, Greater Allegheny, New Kensington and Shenango. University-wide, fall 2016 semester enrollment is 99,133, an increase of 1,639 (1.7 percent) students from last year.

"We are delighted with the results in enrollment this year which are largely on new student growth,” said Kevin Snider, chancellor of the campus. “We're one of the few campuses increasing market share based on students applying specifically to Penn State New Kensington as their first choice campus, as opposed to being referred. This means we are increasing market share within the Alle-Kiski Valley.”

Pennsylvania has been dealing with declining numbers of high school graduates for quite some time. This trend, particularly evident in western Pennsylvania, has long been predicted by demographers and is expected to continue into the future.

New Kensington’s new enrollment figure bucked conventional wisdom and brought the number of students at the campus to a level just below the 2012 enrollment of 705 students.

“We're continuing to attract students from outside of the state which is good news for employers,” Snider said. “To be where we are in this market is a testament to the quality of our education, the great faculty and staff, and the efforts of a terrific Admissions Office."

Robert Pangborn, vice president and dean for Undergraduate Education, said the enrollment numbers are in keeping with the expansion of four-year programs at campuses and the number of applicants Penn State continues to attract.

“Enrollment at the University’s Commonwealth Campuses remains strong, with several campuses seeing growth,” Pangborn said. “Also, the enrollments are in line with a shift away from associate degree programs, particularly at campuses, where the growth trend in four-year programs more than offsets the decline.”