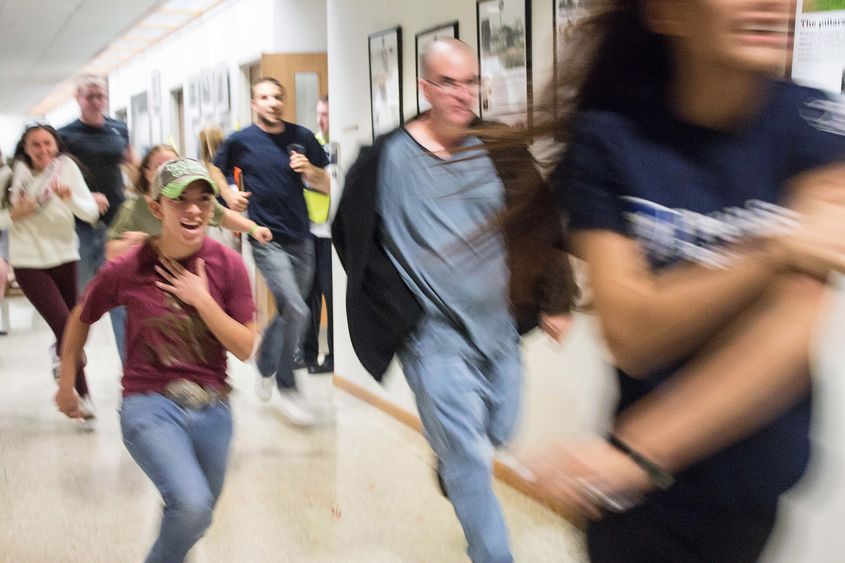 MONACA, Pa. — As police officers burst into the Penn State Beaver Student Union Building on Monday, Nov. 16, cries and screams could be heard echoing throughout the halls.

Fortunately for everyone, it was only a drill.

Police and paramedics from Penn State Beaver, Center Township, Monaca, and surrounding communities conducted an active shooter response training exercise at Beaver with the help of students from Beaver, Shenango and New Kensington.

“It was a great learning experience for the students as well as local law enforcement. We wanted to make it as real as possible to properly educate everyone involved,” said LaVarr McBride, instructor in administration of justice, who sponsored the event through his introduction to criminal justice classes at the three campuses.

Approximately 65 students were involved in some capacity. Many were victims, while some were allowed to shadow law enforcement and medical teams to learn what it’s like to be in those jobs during an emergency situation.

“There is no better place to learn than in a safe environment, where mistakes can be made as part of the learning experience,” McBride said.

McBride and Carey McDougall, director of academic affairs, said they want to make sure the campus and local law enforcement agencies are prepared if a dangerous situation were to arise at the Beaver campus.

“The demonstration showed that anything can happen anywhere, and we want students along with local law enforcements to know how to respond in such a crisis,” McDougal said.

To bring a greater sense of realism to the training exercise, cosmetologist Megan Hardy design realistic-looking wounds on several of the students. As the event got underway, gaping leg and arm wounds dripped blood made of powdered sugar, cocoa, chocolate syrup and red food coloring. One student looked like she’d been shot in the head. An abdominal wound on another ultimately proved “fatal” for him.

“The officers told me that the realistic wounds really added to the experience,” McBride said. “It added another level to an intense training exercise.”

Police and students went through three scenarios. The first involved the officers storming the building to subdue a shooter. It only took a few minutes for the officers to complete their objective and clear the building. Medics then took the “injured” to waiting ambulances.

The second scenario had the victims running and screaming down the hall toward the exits as officers breached the building.

“Often in these situations what police officers deal with is a panicked crowd trying to escape while they’re entering the scene. This scenario is a good way for them to learn how to deal with that,” McBride said. “They’re all screaming. Some of them are hurt and crying out for help. Police have to know what to do in that situation.”

The fleeing students were herded out the door by one group of officers while another continued into the building to deal with the threat. The students were lined up against the exterior of the building and sorted into “injured” and “noninjured” groups. Medics offered treatment to the “injured” students while the others awaited questioning.

Inside the Student Union Building lobby, two students lay “dead” and two others were “seriously wounded.” Their classmates, who had returned to the building to observe the aftermath, stood in stunned silence as medics reported the injury count over their radios. One “injured” student was carried out of the building in a sling.

“It was very realistic, with everything from the fake wounds to the seriousness of the officers and how they handled the situations,” said Beaver freshman Dina Cable.

In the final scenario, the gunman was holed up in the game room with two hostages while the SWAT team moved into position and hostage negotiators tried to diffuse the situation. The shooter eventually surrendered.

“It was great to have the students take part in the demonstration,” he said. “It helps us better communicate with the students, so they can feel safe knowing we take pride in protecting them.”

“I feel safe knowing that even though this was a demonstration, the officers treated it like an actual situation and handled everything in a serious manner,” said Beaver freshman Brittany Garza.