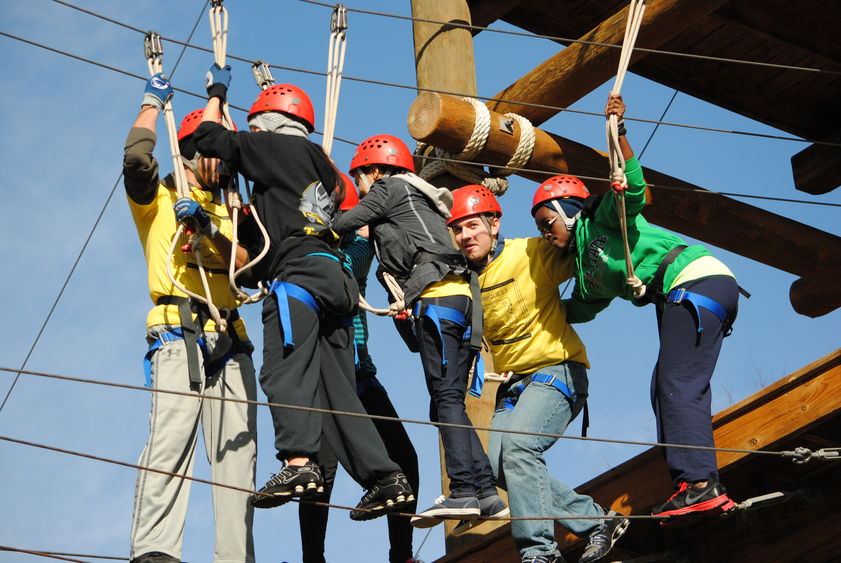 Students from Penn State campuses in western Pennsylvania work together on the high ropes course at the annual LeaderQuest conference. The activity builds teamwork and leadership skills.

NEW KENSINGTON, Pa. — Penn State New Kensington is on the verge of getting an infusion of new student leaders. Five campus students attended a leadership conference in the fall, and if history serves as a guide, most will assume leadership berths on various campus committees and organizations.

LeaderQuest is a two-day event that brings together emerging student leaders from the Penn State campuses in western Pennsylvania — Beaver, DuBois, Fayette, Greater Allegheny, Shenango and New Kensington. Held at Penn State’s Stone Valley Recreation Area in Huntingdon County, about 17 miles from the University Park campus, the conference’s mission is to foster a culture of new leaders on each participating campus. New Kensington students who attended the event were Tyler Campbell, Carly Duncan, Taylor Eackles, Alexander Heyer and Mariana Mbemba.

Student Life staff specifically target students who have yet to hold leadership positions on campus but have the potential to do so in the future. The conference helps aspiring student leaders develop their dormant skills by recognizing personal values and leadership styles and understanding the importance of multicultural competency. Coupled with increased communication skills and respect for the community, attendees are poised to become the vanguard of campus activities.

Jon Vroman, author, philanthropist and award-winning inspirational speaker, delivered the keynote address, “Living College Life in the Front Row.” Vroman stressed that students should be active participants, both on campus and off campus: He called it being “in the front row.” Vroman said the "back row" is reserved for “spectators of life.” He presented five core values for drawing on the full college experience — make authentic connections; create your own reality; be open to change; commit fully; and contribute to others. He encouraged students to develop their unique talents to make the biggest impact on the campus and community.

“Jon really put me deep on life itself,” said Eackles, a freshman psychology major. “He taught me to be more open to people and don’t judge them off looks or personality.”

Eackles, who grew up in the Homewood neighborhood of Pittsburgh and attended Westinghouse Academy, identified with Vroman’s childhood. Vroman, who was raised in a military family where moving from school to school was a part of life, talked about his past and said when he was the same age as the students, he didn't think he would be alive.

“That really shocked me because the way he is now you wouldn't know it because he is very put together and has everything he always wanted,” Eackles said. “He showed me that not only did people like me have a rough childhood, but anyone can have one.”

LeaderQuest was Vroman’s second presentation for Eackles. He spoke at the campus in August, during New Student Orientation.

“I wouldn’t mind seeing him again,” Eackles said. “Every time I do, he just opens my eyes to more things.”