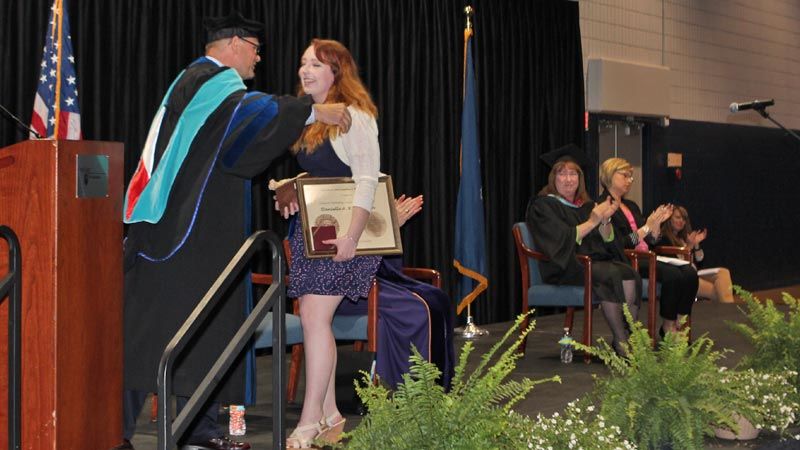 A junior communications major wins the campus’ highest student honor at spring award ceremony
This annual award is given to the student whose outstanding qualities of character, scholarship, and leadership contribute to the prestige of the campus.

Demonstrating excellence in the classroom, providing leadership on campus and displaying citizenship in the community are Penn State ideals.

Danielle Richardson, a junior communications major, was recognized for personifying these Penn State ideals when she was named the 2016 recipient of the Eric A. and Josephine S. Walker Award at the Academic and Student Achievement Awards ceremony at Penn State New Kensington.

The Walker award is given to the student whose outstanding qualities of character, scholarship, and leadership contribute to the prestige of the campus. The award was established in 1980 by Penn State President Eric Walker and is presented at each of the 24 Penn State campuses.

A member of the campus' Honors program, Richardson's academic prowess and leadership acumen provided solid credentials for a Walker award. Richardson is vice president of the Lion Ambassadors, former vice president of the Student Government Association (SGA), student representative of the Student Activity Fee committee, a New Student Orientation leader, and staff writer for the Nittany Pride, the student newspaper.

In addition, Richardson serves as an academic success coach in the campus Success Center. She is trained to assist students using academic resources and the new class scheduling tool, LionPath. One nominator wrote, “Ms. Richardson’s contributions to the work of the Penn State New Kensington Academic Success Center in the newly formed role of student academic success leader have been nothing short of invaluable.”

When campus leaders are needed to serve as delegates on campus-wide teams, Richardson is the first name on the volunteer list. She designed a public relations campaign for the new “Common Schedule” at Penn State, helped a local community organization prepare training videos for displaced workers re-entering the workforce, and contributed to the Better Block initiative for the city of New Kensington.

The Kiski Area High School graduate presented two research projects at the campus’ annual Research and Creative Exposition. She also helped plan Career Day, which is held in conjunction with the expo, and the Etiquette Dinner, which is designed for students as a workshop on proper business dinner etiquette and on best practices for networking and handling of awkward social situations.

“I am truly happy when I get to contribute to the well-being of the campus, the community, and to my fellow students,” Richardson said. “To me, serving means more than just achieving personal and professional goals. To me, it is a way of life, and something that I will continue to do after I graduate.”

Learn more about the Communications program >>