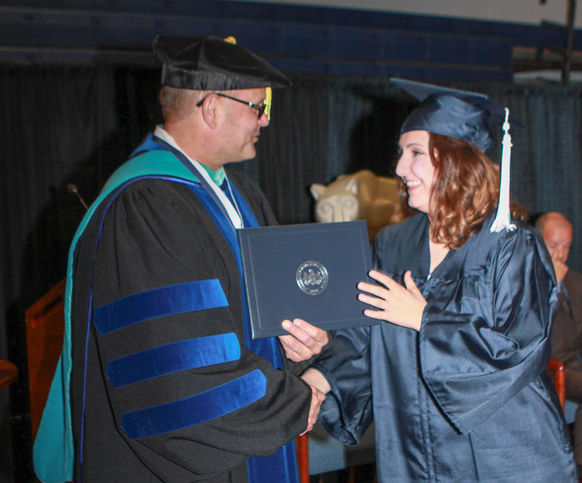 Shorkey prepared the new Penn Staters for life after college and shared the formula for success he followed while building the automotive empire. Shorkey attributed his success to the knowledge he garnered from studying the lessons of the most successful people in the world. Adherence to their principles helped him in the business world, as well as his personal life. He stressed to the new alumni that “this formula is transferable to anyone and to any business.”

Snider opened the ceremony with remarks about the magnitude of the graduates’ achievements as they join the chronicle of 5,224 graduates from the New Kensington campus that dates from 1960. Commencement is the public recognition of those accomplishments, and demonstrate the University's pride in the students' achievements.

“Today your names are added to the list of men and women who have earned degrees from The Pennsylvania State University,” Snider said. “The significance of the occasion is not that you are one of many, but that you yourself have achieved a worthy goal.”

For the first time, U.S. service members and veterans donned military honor cords with their caps and gowns. The red, white and blue cords were worn by students who have honorably served, are serving or are commissioned to serve in the U.S. military. The military honor cords program was implemented to recognize students’ service to their country as well as their academic achievements.

For photos of the graduates, visit http://psnk.smugmug.com/.

Graduating with a job
New Kensington’s class of 2016 embodied the impact that campus students made in the classroom, at research facilities, during internships, in communities and around the world. They personified the “Penn State Lives Here” initiative and were “inspired doers” in an environment that values teamwork, success and service.

Alcoa is GREAT
Koscianski attended the New Kensington campus for two years before completing his studies at the University Park campus. During his time at New Kensington, Koscianski was a member of the campus GREAT (Growing Regional Excellence through Experience, Academics and Training) program. The initiative matches promising engineering and information sciences and technology students with internship opportunities in the local region. Unlike many other programs, GREAT provides students with the opportunity to build professional skills and experiences starting as soon as their first year at the campus.

Koscianski earned a paid internship with Alcoa at the Alcoa Technical Center (ATC) in Upper Burrell. He worked during the semester and summer while at New Kensington and during the summer after moving to University Park. Koscianski was a part of a design group that worked with product design, development and site design. When assigned a project, he formulated and executed a resolution of the problem.

“I was responsible for meeting with customers to identify solutions to multiple issues in a timely and innovative manner,” said Koscianski, a resident of Lower Burrell and a product of Burrell High School. “Once I devised a solution, I met with my mentor and the customer, and followed it through to implementation.”

The quality of his work drew the attention of his supervisors. He was offered the position of design engineer in fall 2015, and begins his career at the Technical Center in June, five weeks after graduating.

“Justin did an outstanding job in managing and implementing several key projects at ATC, in both our central maintenance organization, and most recently, our Product Design and Development group,” wrote Leighton Cooper, director of technology at ATC. “He is a great example of leveraging our local talent through the Penn State New Kensington GREAT program. We look forward to continuing to hire top talent from the campus.”

Koscianski also credits the New Kensington campus’ “2 + 2” plan with laying the foundation for his new career. The program allows students to start their major at one campus and transition to another campus to finish. Available for most majors, it is the most common path to a Penn State degree as about 60 percent of students choose 2 + 2.

“Penn State New Kensington offered me the possibility of gaining the first two years of my education close to home, and I enjoyed the small class sizes, which allowed for a more personal education experience,” Koscianski said. “I am extremely grateful for the many educational and professional experiences I would not have had elsewhere. The campus will always have a lasting impression on me and my future.”

Koscianski is using the “gap” between college and career to decompress. He is spending time with his grandparents at camp and working on the truck he recently purchased.

Security at PwC
In contrast to Koscianski, Russo stayed at New Kensington for four years, a semester abroad notwithstanding. Identical to Koscianski, she carved a niche in the workforce through an internship.

“I took an internship with them last summer, which resulted in a job offer,” said Russo, a resident of Plum.

Russo was the consummate student who enjoyed the full college experience, both academic and extracurricular. When she wasn’t working as an intern, or a barista for the Junction Starbucks coffee bar on campus, or server at Boston Market, Russo was working on activities for the campus.

The Plum High School graduate was selected for a 2015-16 term as president of the SGA, after serving as vice president and secretary previously. She was already secretary of the Lion Ambassadors before assuming her SGA duties. Her outside-the-classroom work did not affect her studies, as she posted a 3.4 grade-point average.

To expand her experiences globally, she spent the fall 2014 semester at the University of Limerick in Ireland. She enjoyed four months of learning abroad as a part of the campus’ Global Programs initiative. The program provides students with a variety of opportunities to study in foreign lands for varying periods of time — a week, summer, semester or year. The objective is to offer students a broader education than can be obtained through classroom experiences.

“I have always had a thing for traveling, and I first went abroad alone when I was 18,” said Russo, a recipient of an Elbert S. Howarth Scholarship. “So going to another country to stay for a while seemed like the perfect option. Ireland is small, but rich in culture, and the people are so welcoming.”

Russo might slake her traveling thirst with her new job. Another campus alumnus and information sciences and technology graduate traveled abroad for PwC. Ray Mastre is a director of SAP Security consulting in San Francisco. He joined the company’s New York office after earning his degree. He later accepted a position to lead PwC’s European SAP Security business in Zurich, Switzerland. Returning to the New York office in 2011, he rose through the PwC ranks to his current role as a director. Mastre also was president of the SGA.

For more on the information sciences and technology program, visit www.newkensington.psu.edu/4-year-information-sciences-technology