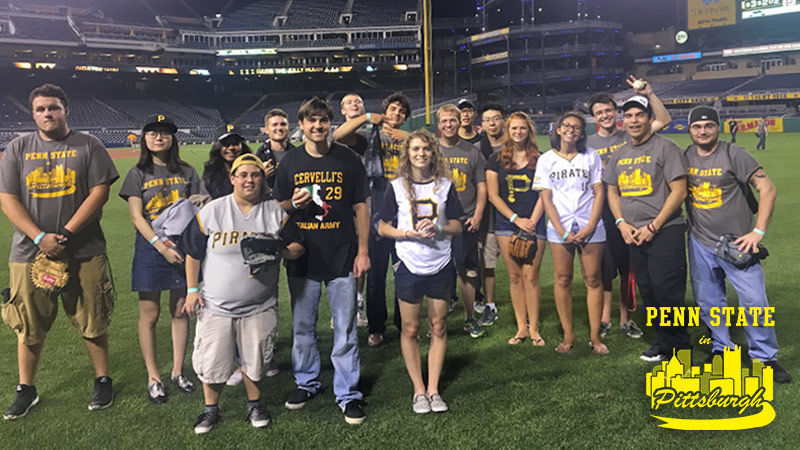 This series of events brings hundreds of Penn Staters together each year to enjoy the culture and beauty of Pittsburgh. From baseball games to trips to the theater, there is something for everyone to enjoy.
Connecting Penn State students in one of America's most livable citites

It all started with 300 Penn Staters at a Pittsburgh Pirates game.

In 2013, the Office of Student Life planned a new series of events to bring students together and take advantage of our proximity to Pittsburgh.

“Penn State in Pittsburgh” has provided over 2,000 Penn Staters from 8 campuses the opportunity to gather in and around Pittsburgh for different experiences.

There is something for everyone to enjoy, and the Penn State in Pittsburgh programming series connects students to the city’s culture and beauty through campus trips to sporting events, theaters, museums, the zoo, and shopping destinations.

At least once a month, Penn State New Kensington students can step on a shuttle to the city for an activity.  Whenever possible, the adventure includes access to a special feature.  For example, last year's Pittsburgh Pirates game included a large pre-game tailgate and the opportunity to step onto the field and play catch under the bright lights of PNC Park after the game.

Sports aren’t your thing?  Last year, Penn State New Kensington offered discounted tickets for the musical "Finding Neverland" at the Benedum Center in downtown Pittsburgh.  A Penn State alumnus was in the cast, and students were able to attend a behind-the-scenes interview before the show.

“I was surprised and excited that Penn State New Kensington organized a trip to see Pittsburgh theater. I had just seen 'Finding Neverland' on Broadway over the summer, and so I had fun noticing the differences between the Broadway show and the national tour,” said Alex Conte ('20, chemical engineering). "I was able to ask questions directly to the cast members, and I enjoyed getting their perspective on things from the show."

The Penn State student activity fee subsidizes the cost of these activities, which allows students to explore the extremely interesting and livable city of Pittsburgh at a discounted price.

In addition to getting out and exploring the city, the Penn State in Pittsburgh series gives students the opportunity to connect with Penn Staters from other western Pennsylvania campuses.  This year, we are also looking forward to meeting some of our local Penn State World Campus friends for the first time at the Pirates game in September.

These in-person meetups benefit any student who may eventually change campuses through the Penn State 2+2 Program.  Depending on their degree program, students can transition to another campus, such as University Park, Behrend or Altoona, to finish their degrees.  Students just might cross paths with another 2+2 student in their program at one of these events, so we like to facilitate those connections.

However, meeting other Penn Staters is beneficial to all of our students, whether they stay at one campus for all 4 years, transition to another campus via 2+2, or earn their degree online.  Penn State alumni are notoriously supportive of their fellow Nittany Lions, which is evident by the enthusiasm of our Penn State Alumni Association, the largest dues-paying organization of its kind in the world.

Shannon Josefoski, 2016-17 Student Government Association president and 2017 THON dancer, enjoyed the opportunity to connect with fellow student leaders from other campuses at the Pirates tailgate social last year.  "It made it much easier to reach out to them during the school year and ask for help or to bounce ideas off of one another.  One of the best parts of getting to meet people from the other Commonwealth Campuses is realizing how similar and how amazing their experiences as a Penn State student has been.  No matter the location, the size, and majors available, WE ARE all Nittany Lions," said Josefoski (’18, project and supply chain management).

The Office of Student Life is still in the process of finalizing a few more activities in the Penn State in Pittsburgh schedule for the 2017-18 academic year, but so far, students can look forward to the following events: