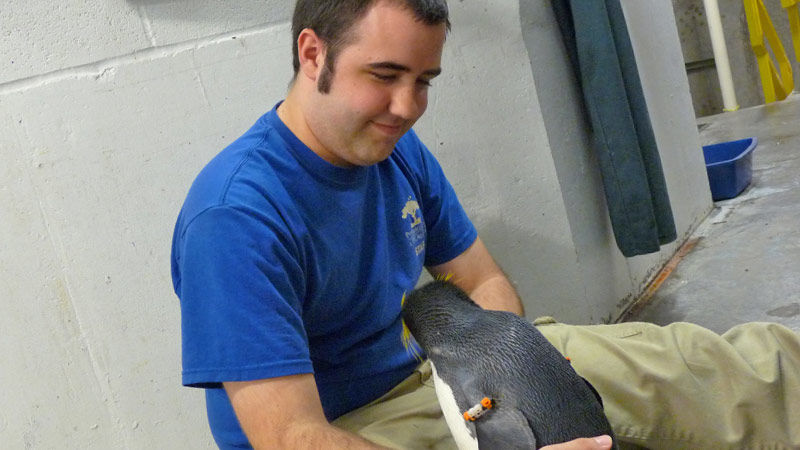 Alumni Spotlight: biology and the 2+2 plan

From interning with the affectionate penguins at the Pittsburgh Zoo to researching orchid bees in the tropical forests of Peru, this biology major maximized his Penn State experience.

Brady Boyer, class of 2015, may have started his college journey a mere 25 miles or so from his hometown, but soon enough, the whole world was his classroom.

With so many opportunities available to students at Penn State, one never knows what course or activity might open a door to a new path.  For Boyer, it was the course BIOL499A -- Tropical Field Ecology.

The following year Boyer conducted independent research on orchid bees in an area of Peru where no one had done so before.

“This experience was one of the best experiences of my life, and it confirmed my desire to do more research of my own,” Boyer said.

Now a graduate student in the same Penn State research lab, Boyer is working on a master's degree in ecology.

Boyer knew that he wanted to study biology in college after teaching ecology and conservation at Camp Seph Mack, a nearby Boy Scout summer camp.

The graduate of Apollo Ridge High School was looking for a university with a good science program, and he wanted it to be located in his home state of Pennsylvania so that he could save money with in-state tuition rates.

He found Penn State during a campus visit with the Westinghouse Science Honors Institute.

Boyer spent 2 years at the New Kensington campus before transitioning to University Park to finish his B.S. in biology.  Penn State calls this the 2+2 Plan.

By attending Penn State New Kensington for his first 2 years, the financially responsible Boyer was able to save money on living expenses and tuition.

Interning on the weekends

Boyer capitalized on the smaller class sizes at New Kensington, and also on the employment opportunities available in the nearby city of Pittsburgh.  During the spring semester of his freshman year, he interned with the Pittsburgh Zoo and PPG Aquarium.

He spent his weekdays in class and weekends at the zoo while he completed an internship in animal husbandry.  His responsibilities included feeding the penguins and the saltwater aquaria, as well as keeping their exhibits clean.

"Feeding the animals was always fun because some animals require special methods of feeding. For example, the Frog Fish would only eat if you put a krill on a small stick and wiggled it in front of her face, and the Giant Pacific Octopus would always try to escape during feeding!"

The zoo's saltwater aquaria includes the 2-story tank, as well as the octopus tank, coral reef tanks, seahorse tanks, and several others.

Feeling prepared for the next steps

New Kensington offered Boyer a transition period that he credits to his success in college.

“Going to New Kensington before University Park allowed me to learn how to be a successful college student without very many distractions,” Boyer said. “At University Park, there is much more happening outside of school, and it is common to see people focus too much on the extra things. Through my experience, I believe that underclassmen that start at University Park have a harder time succeeding than anyone from the 2+2 program.”

Boyer was a part of the Honors Program at New Kensington, where he was able to do independent research under the direction of Dr. Bill Hamilton, assistant professor of biology.  The research Boyer completed with Dr. Hamilton and Ms. Sillman, senior instructor in biology, as his advisors made him realize how fulfilling it can be to discover something on his own.

“The experience that I got from the biology program at New Kensington gave me the beginning knowledge that helped me put my foot in the door at University Park,” Boyer said.

With the guidance of his biology faculty mentors, Boyer set out to design an effective trap for an invasive agricultural pest.  He studied the behavioral preferences of Halyomorpha halys, better known to most of us as the brown marmorated stink bug.  Boyer conducted over 300 trials of stink bug reactions to a variety of variables, including different types of surfaces, colors, temperatures, and smells.  Interestingly enough, their attraction to the color yellow was statistically significant.

When asked about his expectations for his college experience, Boyer said, "I expected that my college experience would include the possibility to meet some interesting professors and learn a lot from them, as well as make friends and have fun while in school. What I didn't expect were the opportunities that have come from Penn State... So, I guess I could say that my expectations were nowhere near what I have been so lucky to have experienced."

We also asked if he would he do anything differently if he were to go back to school again.

"If I had to do undergrad over again, I would participate more in clubs and events. There is so much happening in and around [the New Kensington] campus and I would like to experience more and meet new people. I would also try to pay off some of my student loan interest while in school."

Even in a hypothetical situation he's still financially responsible.

The "2+2 Plan" is the most common path to a Penn State degree. More than 50 percent of Penn State students from all locations choose this path, and it is available for the vast majority of our majors. Learn more about the Penn State 2+2 Plan >>