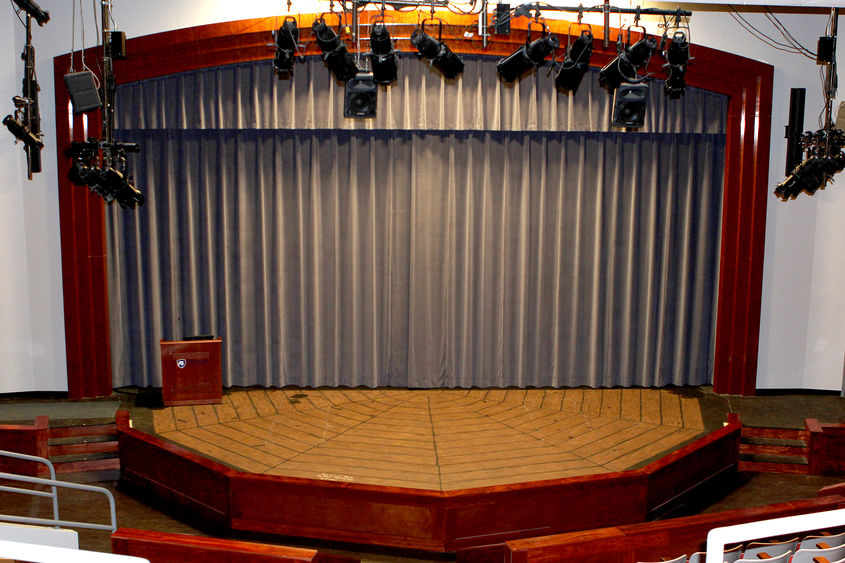 The new proscenium arch, with the grand drape drawn, defines the stage opening of Penn State New Kensington’s renovated Forum Theatre. Laminated case work and framing of the proscenium and stage apron give the theatre a Roman-style look.

NEW KENSINGTON, Pa. – With the opening of the fall stage production of “Footloose: The Musical,” on Nov. 4, Penn State New Kensington unveiled its new hybrid stage in the Forum Theatre. While the original thrust stage brought the scene into the audience, the new proscenium stage defines the scene.

And no, the renovated theatre will not be renamed the "Footloose Theatre." The building, which opened in 1971, received its name after the inaugural production, “A Funny Thing Happened on the Way to the Forum.”

In addition to the reconfigured and upgraded stage, the theatre’s makeover included laminated case work, a new main curtain, new sound panels and ADA seating. New flooring and carpet tiles were installed, and the walls were repaired and painted.

“The new proscenium arch makes the space better than ever,” said James Baker, who directed the campus "Footloose" production. “While the thrust stage allows us to bring the action forward to the audience, we can still ‘frame in’ the scenery in the background.

“The actors now have a chance to perform on an authentic thrust stage,” Baker said. “Most actors perform in a proscenium theatre. Having a hybrid between the two really allows the audience to feel like they are a part of the show. We can break the fourth wall with our shows without really disrupting what is taking place in the story.”

From an actor’s perspective, the changes are boffo. Ian Callender, a sophomore engineering major, had a role in “Toxic Avenger,” the last production in the “old” theatre in fall 2015 and a role in Footloose in the “new” theatre. He gives the increased size of the stage a four-star review.

“My favorite improvement to the theatre is how much more open the stage feels,” Callender said. “In 'The Toxic Avenger' we had about six cast members in the show, and at times the stage felt clustered. In 'Footloose' we had over 20 people in the show and were still able to perform. This will allow us to put on bigger shows in the future.”

Complementing the proscenium is the new main curtain, also known as a grand drape. The campus’ drape is called a traveler curtain and is mounted on a track behind the arch. Its two sections part in the middle and are pulled horizontally to the wings of the stage. It is drawn to hide backstage activity and opened to provide additional scenery. Whether the grand drape is a traveler curtain or a fly curtain, which is raised vertically, depends on the stage’s design, visuals and space limitations.

While the physical improvements to improve visuals received top billing and rave reviews, the auditory and seating upgrades also were Tony Award-worthy. New sound panels were installed around the theatre for higher-quality acoustics.

In the "less is more" category, the first row of seats was removed to create four ADA seating sections in the orchestra pit. The sections were framed with the same laminated wood-style used for the proscenium. The theatre’s raked seating, which is the term for seating that slopes upwards away from the stage, allowed for the changes as no sightlines were impeded.

“The addition of the ADA seating is also a nice touch,” Baker said. “We can now be inclusive and accommodate anyone that wants to come enjoy a night at the theatre.”

To give the Forum Theatre that Broadway feel, a VIP box was constructed on the upper-level. Muppet critics Statler and Waldorf would be proud to offer their witticisms from the new venue.

The result is a Roman-style theatre that can handle dramas, comedies and musicals, from Plautus to Oscar Wilde to Monty Python. “A Funny Thing Happened on the Way to the Forum” was based on a play written by Plautus, a popular Latin playwright who died in 184 B.C.

“The changes were made to improve the appearance and functionality of the cultural arts programs at the campus, and add to the quality of public events,” said Jason Bush, director of business and finance at the campus. “The new technology enhances the learning experience for students.”

In addition to stage productions, the theatre serves as home to many campus activities, including Fall Commencement, New Student Orientation, Academic Achievement and Student Awards ceremony, and special guest speakers. Technological upgrades were added to accommodate the numerous academic classes held there. The new lectern has automated controls to allow users to control the new LCD projection system and sound system.

The local community also utilizes the building. In keeping with Chancellor Kevin Snider's vision of Penn State New Kensington developing a larger presence in the community, the theatre is opened to nonprofit organizations. New Kensington Civic Theatre, one of the oldest, continuously performing, all volunteer community theatres in the country, and St. Joseph High School in Natrona Heights, stage their annual productions in the Forum Theatre.

The campus and the Civic Theatre troupe often pool their resources for community productions. “Frankenstein: The Musical” and “Lucky Stiff” were collaborative efforts utilizing their collective onstage and backstage talents.

“Our theatre is a cultural asset in the area,” Snider said.  “We now have a beautiful theatre for the campus and community to use for years to come.”

The renovations were funded by a combination of private donations and student facilities funds. James and Joan Moore were the lead donors of the private effort. James Moore, of Saint Johns, Florida, has a long association with the campus and is the past president of the Penn State New Kensington Advisory Board. In 1998, he endowed the Moore Family Scholarship.

“Jim and Joan Moore led the way with a substantial gift that was supplemented by our students,” Snider said. “This is a wonderful example of the quality that can come from friends of the campus, our students, and our staff.”

New Kensington stretched its renovation dollars by completing most of the project using the campus maintenance team. The technical services staff did yeoman’s work in getting the theatre ready for the fall musical.

“Our staff did a lot of this work in-house, which not only allowed us to get more out of the funding, but we believe it raised the quality of the work being done,” Snider said. “I'd like to thank the Moores, the students, and the staff for their investment and their patience. It has paid off.”

About the Forum Theatre

The enthusiasm and dedication of Harry Russell, campus director from 1968 to 1977, coupled with the support of the community, paved the way for the opening of the Forum Theatre in 1971. The old gymnasium was renovated and converted into the 350-seat theatre, which Russell helped design. It soon became the local center for the arts for the community.

Beginning in 1973, Peter Grego headed the student productions. In 1977, faculty member Lillian Coury was named director of theatre. Over the next 26 years, Coury expanded the theatre arts program and directed more than 50 stage productions, including the most popular play in campus history, “Brigadoon,” in 1992. The appeal was enhanced by Robert Arbuckle, campus executive officer from 1977 to 1992, who had the lead role of Mr. Lundie, the elder school master. All performances were sold out.

The theatre arts program continues to thrive with student plays performed in both the fall and spring semesters. After Coury’s retirement in 2004, Dan Kirk took over directorial duties for the next four years before he stepped down in 2008. Bill Mitas succeeded Kirk and directed 15 plays until retiring last year. The current director is James Baker, a graduate from the campus, who worked as an actor under Mitas. "Footloose" was Baker’s directorial debut at the campus.