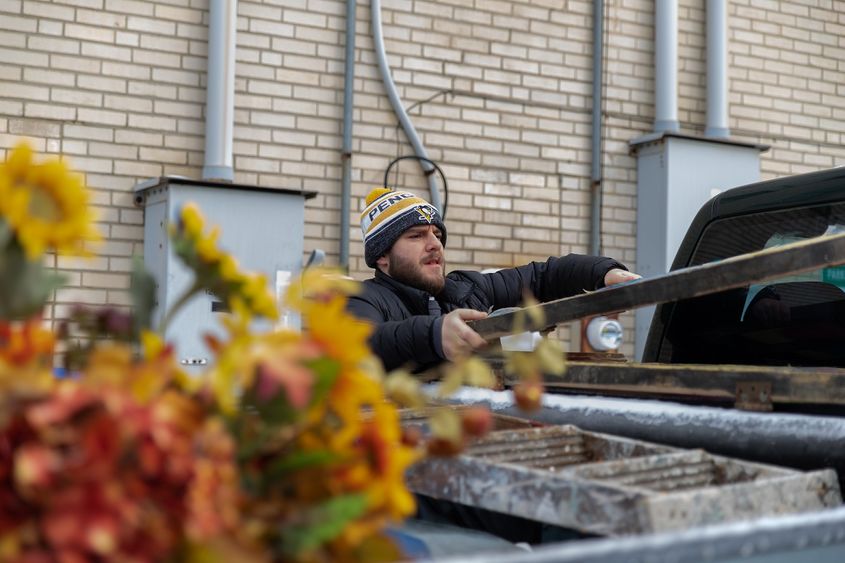 NEW KENSINGTON, Pa. – Dr. Martin Luther King Jr. once said, “Everybody can be great, because anybody can serve.” More than 50 student volunteers from Penn State New Kensington and four other campuses followed this advice when they spent this year’s MLK Jr. Day of Service completing community projects throughout the region on Jan. 21. This year, the New Kensington campus hosted the event, with volunteer groups helping six organizations throughout the Alle-Kiski Valley.

“I feel that one of the main pillars of Penn State is giving back, and today is just enforcing that.”

Although Penn State students traditionally have the day off from classes for the federal holiday, volunteers make it a “day on” to honor the life and legacy of King.

“It really helps us connect and honor someone who was so into human rights and serving others and the good of human kind,” said Michele Marcks, assistant director of student affairs at the New Kensington campus. “That message is in the forefront of our minds during the entire day, which makes the service that much more important.”

The national MLK Jr. Day of Service has become an annual, multi-campus affair between New Kensington and other western campuses. This year, participating campuses also included Beaver, Fayette, Greater Allegheny and World Campus. Each year, a different campus leads the charge and partners with community agencies for projects. 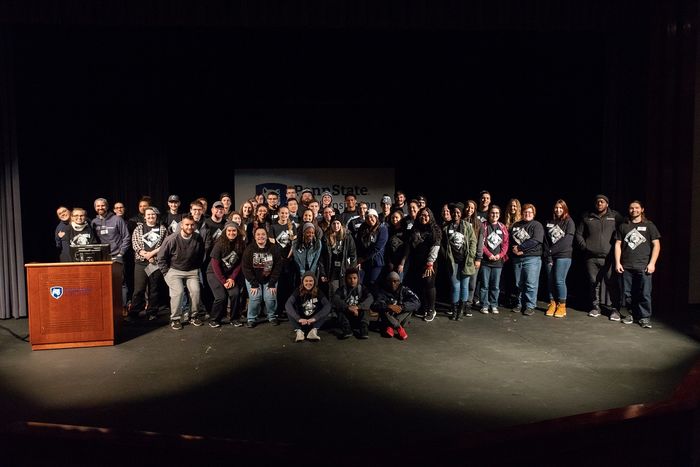 Penn State students from the Beaver, Fayette, Greater Allegheny, New Kensington and World Campus gather for a group photo before volunteering during the annual MLK Jr. Day of Service on Jan. 21. The 2019 event was hosted by Penn State New Kensington.

“I feel that one of the main pillars of Penn State is giving back and today is just enforcing that,” said Zack Novich, a first-year student at Penn State New Kensington.

Projects for the day included cleaning shelter common areas and stocking the pantry of the Alle-Kiski Area HOPE Center; cleaning and organizing items at the Casino Theatre in Vandergrift and the Alle-Kiski Historical Society in Tarentum; painting and cleaning at the Rachel Carson Homestead in Springdale; sorting clothing and cleaning at the Salvation Army in New Kensington; and organizing and sorting books at the People’s Library in New Kensington.

Janis Oberdorf, treasurer and volunteer with the Casino Theatre, said their organization looked forward to the students visiting and lending a helping hand.

“When Penn State reached out and said the students wanted to give up their day off to help, we were thankful,” she said. “It makes us feel really good.”

Before making their way into the community, students heard from Lt. Phillip Davies of the Salvation Army in New Kensington who asked the group to think about the importance of volunteering.

“It’s through volunteering that we can begin to break down barriers,” explained Davies. “Many programs in many communities would not be able to succeed without volunteers. I would encourage you to continue to have a heart to serve others and find true joy in giving back to your community.”

In addition to the service aspect of the event, Marcks pointed out the importance of Penn State campuses being part of communities across Pennsylvania.

“It’s great to see so many campuses come with such great numbers, such enthusiasm and great student leaders,” said Marcks. “It’s also important for the community to see that, because although they may know that Penn State New Kensington is here, sometimes they may forget that Penn State is across Pennsylvania and we have students from beyond the state. We want to and will continue to give back to Pennsylvania.”

“All of the students responded with wanting to continue doing community service in the future, both while at Penn State and beyond,” exclaimed Marcks.

Tylai Smith, a first-year student from Alabama attending Penn State Beaver, echoed the entire group’s feeling of Penn State pride and being able to share their time for service.

“We’re united,” stated Smith. “We all can relate to something; we all go to Penn State, just different campuses. Martin Luther King – he volunteered and did a lot for a lot of us. It feels good to do the same.”

A photo gallery from the day of service can be found on Penn State New Kensington's Facebook page.

More than 50 Penn State students from five campuses took their day off from classes to make it a "day on" for the annual MLK Jr. Day of Service on Jan. 21. The 2019 Penn State New Kensington-hosted event featured volunteerism at six organizations in the Alle-Kiski Valley. In addition to New Kensington, participating campuses included Beaver, Fayette, Greater Allegheny and World Campus.