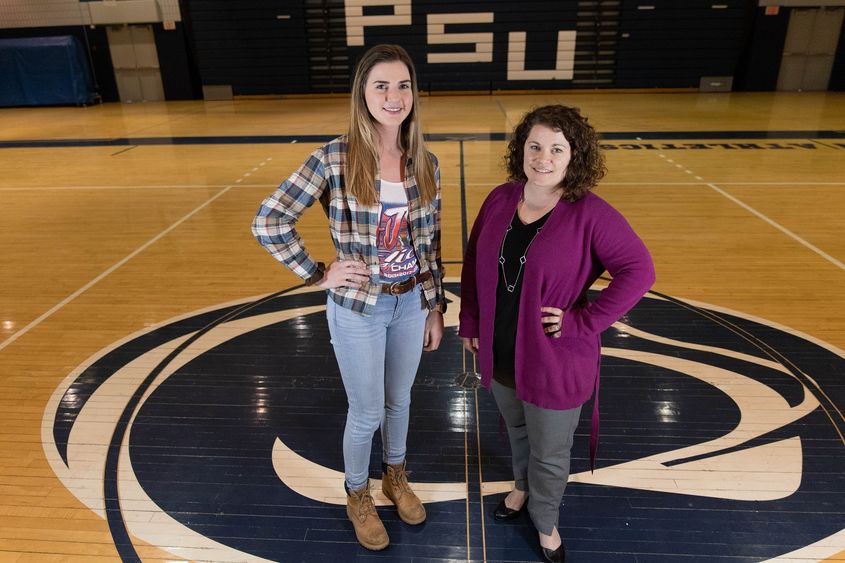 Kaylea Flick, left, a biobehavioral health student at Penn State New Kensington, and Megan Bratkovich, Athletics Director at the campus, stand in the campus' gymnasium. Flick, a student-athlete and member of the volleyball team, was named a 2019 Sportswoman of the Year by the YWCA Westmoreland County at its 25th Anniversary Sportswomen of the Year banquet. Bratkovich, the campus' first full-time Athletics Director, served as the event's keynote speaker.

NEW KENSINGTON, Pa. — Kaylea Flick didn’t start playing volleyball until the seventh grade, but played as many sports as she could in the family’s backyard since she was young. The current junior at Penn State New Kensington credits athletics with helping impact her academics, responsibilities and social life, earning her numerous accolades on and off the volleyball court.

Flick, a member of the campus Honors Program and Dean’s List recognized student, can now add “Sportswoman of the Year” to her growing list of honors.

The YWCA Westmoreland County bestowed Flick with the “Sportswoman of the Year Excellence in a Team Sport” award at its 25th anniversary Sportswomen of the Year awards banquet April 15 in Greensburg, Pennsylvania. The organization’s mission is dedicated to eliminating racism, empowering women and promoting peace, justice, freedom and dignity for all.

“It’s incredible for me to be recognized for something that I love to do,” said Flick, a biobehavioral health major from Murrysville, Pennsylvania. “This award puts into perspective all the hard work, hours and all the blood, sweat and tears I put forth.

“But I don't want this award to just represent me; I want it to represent all the girls and women that I had the opportunity to play with,” she continued. “We all make each other better on and off the court.”

“[Kaylea] is a tremendous example of what a student-athlete should be. She works hard on the court and in the classroom, and she has been recognized for her accomplishments in both. Now this recognition from a wonderful local organization lifting up women in sport is icing on the cake.”

The Franklin Regional High School graduate has been a volleyball team captain in both her years at the campus. In 2018, she was named a Penn State University Athletic Conference (PSUAC) Player of the Week, received Honorable Mention and Academic All-Conference honors for women’s volleyball. Nationally, she was named to the United States Collegiate Athletic Association (USCAA) National All-Academic Team and All-American 2nd Team for the sport.

“I define student-athlete as an individual who strives to better themselves athletically and academically, but not lose sight of one over the other,” said Flick.

“This award represents more than just athletic achievement; it represents a small milestone to encourage women to pursue whatever they desire and not let any person, man or woman, tell them otherwise or lead them in another direction,” she added.

In the spring of 2018, Flick joined the campus’ softball team to ensure that it had enough players to commit to playing that season. Her dedication, commitment and energy for sports and her teammates is a reason Flick received the Spring 2018 Softball Coach’s Award and was nominated and chosen for the YWCA’s award.

“I’m so thrilled for Kaylea,” exclaimed Megan Bratkovich, the campus’ athletics director. “She is a tremendous example of what a student-athlete should be. She works hard on the court and in the classroom, and she has been recognized for her accomplishments in both. Now this recognition from a wonderful local organization lifting up women in sport is icing on the cake.”

To make the 25th annual event even more special, Bratkovich, the first full-time female athletics director at the campus, served as its keynote speaker to share how sports and mentors along the way have played a role in her life and led her to sports administration, a career still widely dominated by males.

“What started as a love for volleyball and wanting to coach morphed into a passion for helping student-athletes,” said Bratkovich, a native of Madison, Ohio, who earned her bachelor of arts degree in mathematics from Elmira College and her master of education degree in sports administration from Bowling Green State University.

She continued, “I stepped out of the coaching ranks and into administration so that I could impact a greater number of student-athletes. Seeing females in leadership roles normalizes it and lets younger females know that they can do it too.”

“We are lucky to have her [Bratkovich] at Penn State New Kensington,” said Flick. “She is encouraging and cares for all the athletes and both men and women are equally acknowledged and encouraged.”

Through her speech and Flick’s award, Bratkovich hopes attendees were inspired to seek careers and opportunities in athletics and mentors.

Both Flick and Bratkovich were honored to be recognized by the YWCA and agree on the importance of females showing support of each other, as well as individuals of all genders uniting.

“I think females deal with enough obstacles to success,” concluded Bratkovich. “We need to support and celebrate each other because, when we do that, all those obstacles get a little smaller.”

“We don’t have to conform to stereotypical norms about what makes us female,” resolved Flick. “If we [men and women] all stand together and realize our true power, we can change anything and everything.” 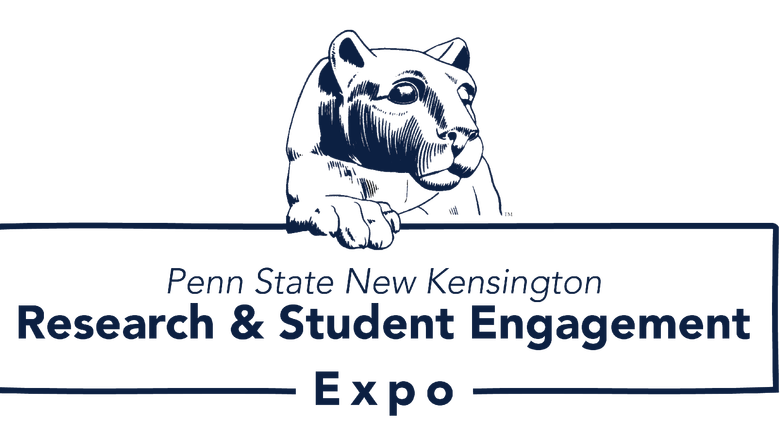