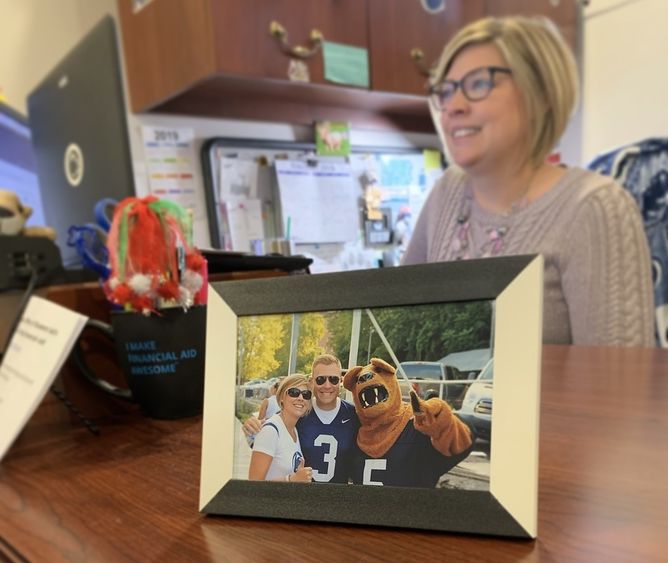 NEW KENSINGTON, Pa. -- If not for a change of heart about attending a leadership retreat her junior year as a Penn State New Kensington business student, Ashley Mazur would never have met her future husband, Dewey Traini.

“It was the year 2003, and we were both students here on campus,” reminisced Ashley, class of 2005, current financial aid coordinator at the New Kensington campus.

Dewey was going into his sophomore year as an electro-mechanical engineering technology student. Both were signed up to be orientation leaders and were asked to attend a leadership retreat.

“Even though we were both involved on campus, he played baseball, I played softball; we never met each other until that morning,” Ashley added. “We were loading the luggage into the passenger van, and that was kind of where I first met him.”

Dewey, class of 2006, still remembers the exciting events of the weekend, from whitewater rafting to bonding with each other over their love for the Pittsburgh Pirates.

“We reconnected at our first group meal, and I made sure I found a seat next to her,” said Dewey, an electrical engineer at GAI Consultants. “I noticed she was wearing a gold watch with a Pirates baseball logo on the inside, so I summoned up the nerve to ask her if she liked baseball and told her I've been a fan my whole life. We swapped stories and found out that we both had the same favorite player growing up, Jason Kendall, and wore the number 18 when playing baseball/softball for that reason.”

Two weeks later, they went on their first date to a Pittsburgh Pirates game.

“I was absolutely and completely in love,” he declared. “We spent every second together, with the majority on campus. We loved to take walks on the nature trail in between classes and spent tons of time just hanging out in former Cats Paws Café, now Café 780.”

“I think the sparks kind of flew right away,” added Ashley. “It was a different type of relationship, and I think it helped that we were here [Penn State New Kensington] and got to experience college together and that we shared a lot of the same extracurricular activities, like Pirates games and travel.”

The couple later attended the campus’ spring break trip to Italy in 2006, where Dewey proposed marriage.

“The proposal didn't go quite as planned, but she said, ‘Yes!’” he proclaimed. “I spent months saving and preparing for a spectacular proposal, but it ended up being a very intimate moment just between the two of us.”

“We still say that August is the month we were always supposed to meet because if you turn an 8 on its side, it's an infinity symbol,” Dewey said. “The eleventh was to symbolize both of us: the 1, uniting in forever, everlasting love together.”

Both of them give credit to Penn State New Kensington staff and friends for the reason they are together today.

“I would credit Theresa Bonk and then Student Government Association (SGA) president, Ray Mastre, for bringing us together by nominating us both for the leadership retreat,” said Ashley.

The happy duo, active members in the Penn State New Kensington Alumni Society, also believes that fate and destiny played a role in bringing them together that August day.

“I still feel, and forever will feel, that Ashley and I were brought together by fate, but we've held ourselves together through love,” said Dewey. “Love is what's kept us together through some very tough times, but we're still as strong as ever. I could write a novel on my love for my wife and how much joy she's brought me over the last 16 years.”

“It was just very coincidental that this happened and we met,” echoed Ashley. “Both of us 100-percent agree that things happen for a reason. That’s why I think this place [the campus] is very special to me and to him, and that’s why it’s something that kept me involved with the campus as an alumna since I’ve graduated. That was a big reason why I was very excited to have to opportunity to work here, too, because this place is more to me than just work. I have a lot of history here, and I just feel like I’m at home.” 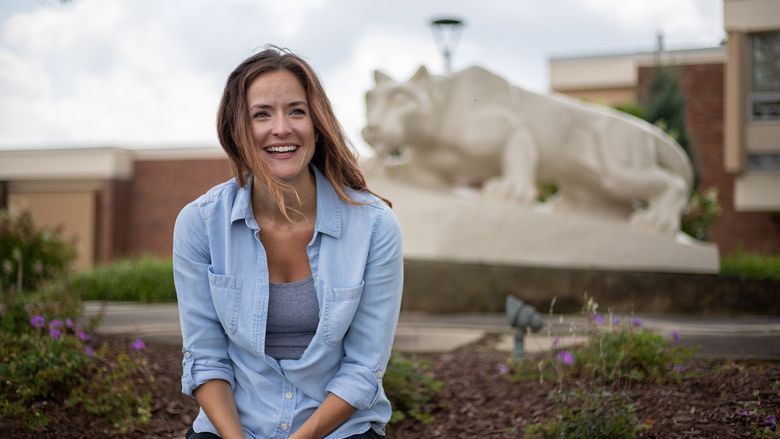